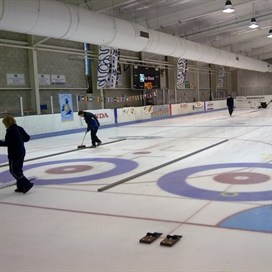 Dumfries Ice Bowl  is the region's largest ice rink, offering a wide range of different ice activities for you to take part in. Whether you are brushing up your curling or skating skills, or trying out for the first time, there is something for everyone at Dumfries Ice Bowl

Dumfries Ice Bowl also have a cafe and bar for you to relax in and a large sports hall - which plays host to a different activities and clubs every week.

The Ice Bowl is also home to the region's Ice Hockey team - the Solway Sharks. Why not come along and support the team during one of their matches

There are a number of Development Schemes running at Dumfries Ice Bowl.

Skate UK Scheme, the learn to skate programme you/your child will be able to pass through 10 levels, from Foundation to Participation.

Ice Hockey learn to play scheme, through these beginner classes participants will have ther opportunity to join the Solway Sharks junior club.

There is the Curling's Cool which is a Royal Caledonian Curling Club initiative which provides introductory sessions for primary school children, through which the basics and essentials of curling are taught.

Finally there's the Snowtots, a Coach led activity session designed to introduce under 5's and parents to ice and ice sports through play. Parents/Guardians are encouraged to join in on the ice (either on skates or not) in order to foster a safe, friendly and interactive environment.

Along with the Cafe and Bar serving meals, snacks and beverages, a mini conference area  /meeting room, and a number of different Birthday Party Packages, the Dumfries Ice Bowl has a wide range of different facillities and activities on offer for you to take part in.

Solway Sk8ing Club - figure skaters (including adults) and synchronised teams
Training for all ages and competition at national and international level.

Solway Sharks - any home matches face-off at 7pm on a Saturday night
The club play in the Moralee Conference of the National Ice Hockey League (North).